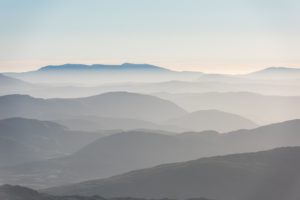 As many of you know, John was on a ministry trip in the month of June.  He had the opportunity to meet with so many believers who are part of the “virtual church” on Facebook and YouTube.  One particular Facebook follower found out that John would be in Europe and she made the decision that she wanted John to baptize her.   John had the opportunity to meet with her and hear her story.  Last November she was near death in the hospital.  As a new believer, on that hospital bed, she made a commitment that if the Lord healed her, she would wholeheartedly serve the Lord for the rest of her life without compromise.  The Lord miraculously healed her and she was determined to have John baptize her the next time he would come to Europe.  Fast forward to June, the night before her baptism, she had a very disturbing dream.  In the dream, a very attractive, sharply dressed man appeared to her and questioned her decision to get baptized.  He showed her two paths.  One was narrow with very few people on it dressed in white; the other was wide with many people on it  (Matthew 7:13-14).  He told her that if she continued on the wide path, she would have many opportunities ahead of her.  He showed her many doors and told her he would open those doors for her if she took the wide path.  He then began to question her.  In the dream he asked her, “Do you think you made the right decision?  Are you sure you want to start on this narrow path that you heard about from Mr. John? If you continue down this path, you’ll lose out on a lot in this life.”  He was waiting for the slightest apprehension in her voice or for her to utter one word of hesitation in her decision.  Instead, she began to shake herself off and said, “No! I am fully determined to go down the narrow path, I’m going all the way!  I want to serve Jesus for the rest of my life!” She woke up from the dream more determined than she had ever been and was baptized the next day!